So Powerful, It Stands in
for Sound and Light 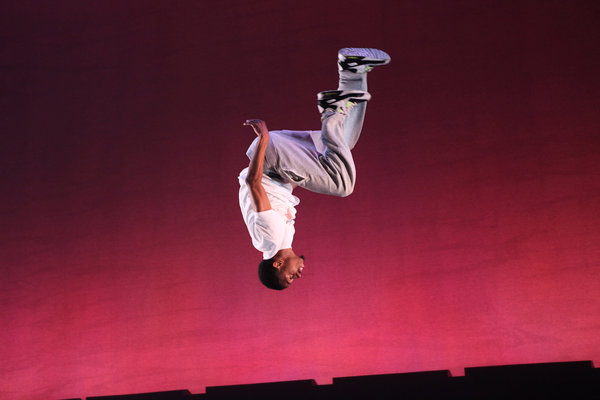 They could almost be dancing for one another, these kids, on the street, in a club. Except that their circle is open at the front and they face outward, performing for spectators. Each gets a turn in the middle, and at first what they do isn’t that impressive. But it builds, and soon enough the dancers are balancing on their heads with legs like angular sculptures, swinging their arms like nunchucks, creating strobe-light effects without strobe lights — inspiring awe.

Rennie Harris RHAW, which opened a run at the New Victory Theater on Friday, is the training company forRennie Harris Puremovement, the Philadelphia-based troupe that has shown, better than any other, how hip-hop can bloom as concert dance. The acronym stands for Rennie Harris Awe-Inspiring Works, but what’s most remarkable about the nine pieces on the New Victory program, mostly choreographed in 2010 by Mr. Harris, is how they don’t settle for eliciting gasps.

There is more to them, that is, than showing off. The vocabulary embraces not just the full historical panoply of hip-hop styles but also salsa, tap and vernacular moves dating back nearly a century. The music ranges from pop to rock to Latin-tinged smooth jazz. One song sounded like a Scottish reel.

The composition can be sophisticated, many-layered, opening up that circle further. In the funky “Brother,” groups keep forming out of other groups, and their passage in and out of the wings suggests, as with some Trisha Brown dances, a field of action wider than we can see.

The hints of narrative in these works are foggier. In “Three B-Boys & a Girl,” the relationships among the titular cast members are underdeveloped, though the opportunities for peacocking occasion some gorgeous slow-motion cartwheels. The excerpt from “Peace and Love” is mystifying, but in a promising and unsettling experiment, a section of house dancing in the work is set to the chaos of traffic noise. In the dancers’ bounce, you can see the missing beat.

Acting is one area in which the inexperience of these talented young dancers shows. Yet in Raphael Williams’s “110th Street,” the dancer Shafeek Westbrook is able to project the aggression that is meant to motivate his dancing, which is marvelously elastic. His colleagues are excellent, too. Neka French, the girl with the nunchuck arms, is fierce.

Brandyn S. Harris, son of the choreographer, shares his father’s ability to turn the hydraulic action of popping into something through which dark emotions course. The younger Mr. Harris is at the center of “Bohemian Rhapsody,” another excerpt and a dark-tinged point in a largely bright and family-friendly program. The music is by Queen, and one revelation is how well popping fits a guitar solo. We see Brandyn get caught and cuffed. We see the compositional potential of a police lineup.

Although the dance turns cartoony, this snippet is tantalizing. That’s a quality it shares with many of the excerpts from longer works, usually labeled “in progress,” that the choreographer has brought to New York in recent years. Mr. Harris’s work is important, and the city should be able to see it in full.